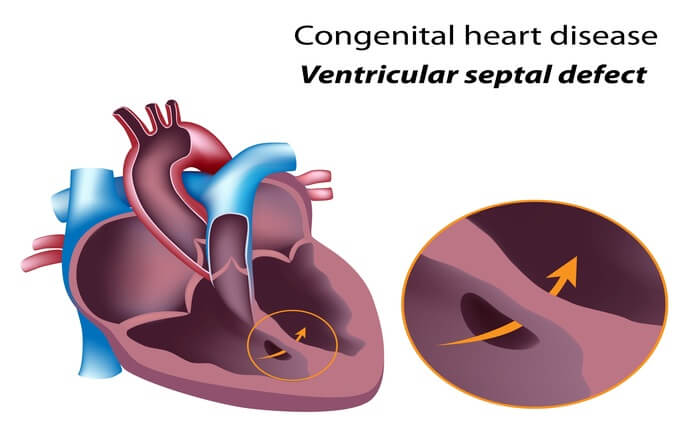 A ventricular septal defect generally refers to a condition in which a hole develops between the right and left ventricles.

As a result, the hole allows the oxygenated blood to transfer from the left to the right ventricle of the heart and get mixed with the deoxygenated blood. This mixed blood then recirculates to the lungs instead of other body parts, causing the ventricles to work harder. Gradually, the pumping capacity of the ventricles gets reduced, and it can no longer pump.

The risk of this defect depends on the size of the hole present in the Septum.
The Ventricular septal defect is primarily a congenital heart issue, which means that this
particular problem is visible right since infancy and may carry on for the longer part of life.

Symptoms to Look Out For:

Significant symptoms are more observed among infants, which include:

Most of these symptoms aren’t easy to be detected in
infants, and one can see any irregularity of heart function when the infant ascends into childhood. Hence any parent should be cautiously observing for sure
signs and symptoms among their children while they are in their early phases of childhood:

these symptoms can be-

Although this disease is primarily a congenital issue, it still needs to be counted to develop the deformity in adulthood. It may so happen that the particular person may have a massive heart attack which may weaken the muscles of the heart’s wall and make way for a hole. There may be many symptoms that attribute to such a condition:

Since the disease is attributed to genetic causes, it makes room for some necessary preventive measures, some of which, if appropriately followed during pregnancy, can give up better results: